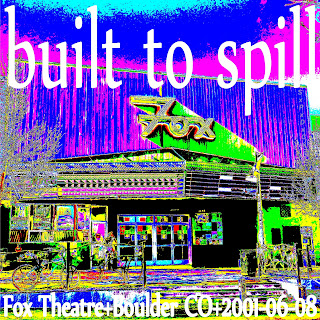 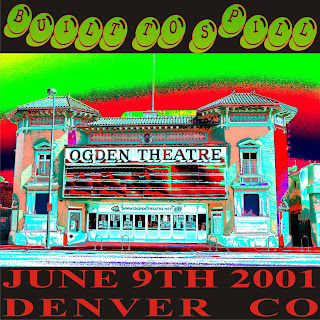 Email ThisBlogThis!Share to TwitterShare to FacebookShare to Pinterest
Labels: Built To Spill 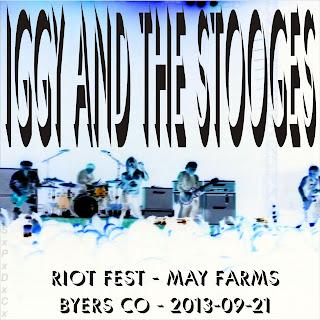 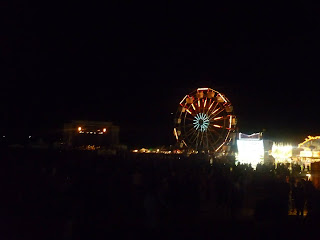 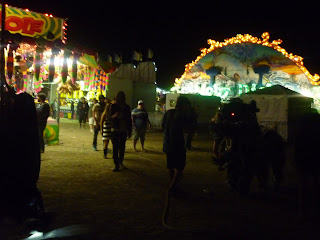 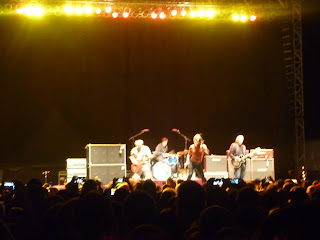 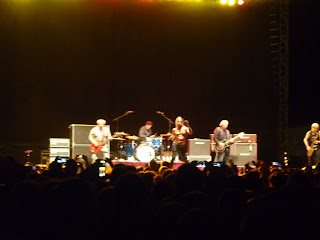 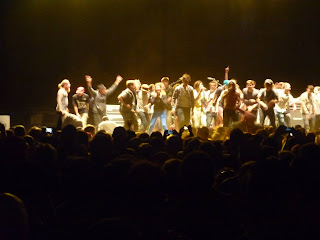 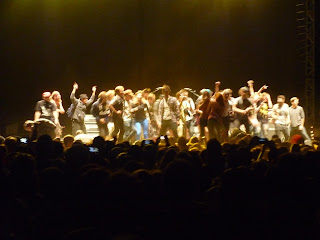 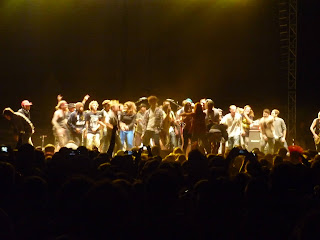 How about another Colorado Riot Fest show?  This one was from the first 2013 edition almost 50 miles east of Denver in Byers.  In a big cow pasture basically.  Iggy and The Stooges featuring Iggy Pop, James Williamson, Steve Mackay, Mike Watt, & Toby Dammit.
This one starts out a bit rough as I get closer to the stage.  Then it's a bit distant sounding but the vocals are pretty clear.  Fun listen.  Then the end suffers because I decide to go get close to the stage the Replacements were playing on. So it is what it is. Warts and all.  Enjoy.
Iggy And The Stooges
Riot Fest - May Farms
Byers CO (USA)
2013-09-21
Recorded and Presented: SxPxDxCx
Source: AT933 >SP-SPSB-1 > M10
Transfer: M10 > USB > Cooledit > CDWave > FLAC
Run time: (62:52.11)
01 Raw Power
02 Gimme Danger
03 Gun
04 1970
05 Search and Destroy
06 Fun House
07 Beyond the Law
08 Johanna
09 Ready to Die
10 I Wanna Be Your Dog
11 No Fun
12 The Passenger
13 I Got a Right
14 Cock in My Pocket
15 Your Pretty Face Is Going to Hell
16 Sex and Money
LINK TO MP3 DOWNLOAD
LINK TO FLAC DOWNLOAD
Posted by SxPxDxCx at 10:46 AM No comments:

Email ThisBlogThis!Share to TwitterShare to FacebookShare to Pinterest
Labels: Iggy And The Stooges, Iggy Pop, The Stooges 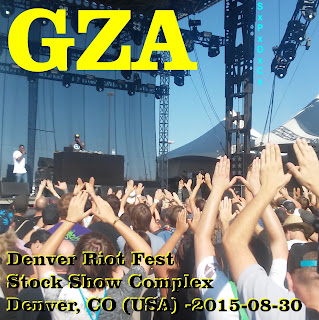 Live Hip-hop can be really hit or miss.  This performance from GZA on this scorching hot August day back in 2015 was mostly hit.  GZA keeps the banter to a minimum and just spits fire with Wu hit after Wu hit.
Crowd is a bit chatty inbetween songs since the lyrics are fairly complex no one is trying to rap along with GZA,  I'm happy with how this sounds and it was a fun performance.  Figured what the hell I'll throw it up on TTTAT.  Enjoy.
GZA
Denver Riot Fest
Stock Show Complex
Denver, CO (USA)
2015-08-30
Recorded and Mastered by: SxPxDxCx
Source: AT933 >SP-SPSB-1 > M10
Transfer: M10 > USB > Cooledit > CDWave > FLAC
Run time: (44:27.00)
01 Conditioner
02 Duel of the Iron Mic
03 Living in the World Today
04 Gold
05 Cold World
06 - interlude -
07 Shadowboxin'
08 Swordsman
09 Labels
10 4th Chamber
11 I Gotcha' Back
12 Clan in da Front
13 Crash Your Crew
14 Guillotine (Swordz)
15 Brooklyn Zoo - Shimmy Shimmy Ya
16 Protect Ya Neck
17 Reunited
18 Triumph
19 Wu-Tang Clan Ain't Nuthing ta Fuck Wit
20 Liquid Swords
21 - time is up -
LINK TO MP3 DOWNLOAD
LINK TO FLAC DOWNLOAD
Posted by SxPxDxCx at 7:49 AM No comments: 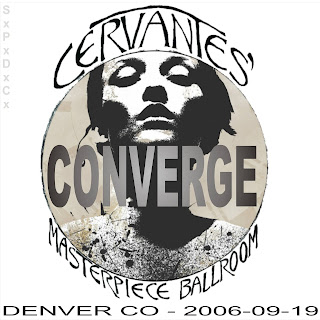 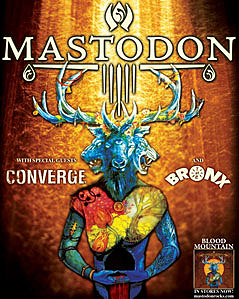 I never went to too many shows at Cervantes.  They just didn't book the kind of shows that I was into generally.  Looking at my recordings list 2006 was a big year for me there.  The Zorn/Patton/Frith show I just posted.  Also that year I saw Gorilla Biscuits and Mastodon.  Both of those sets I have posted previously.  I figured how about one more.
Here is Converge opening up for Mastodon.  What a hell of a show this was.  The Bronx were also on the bill.  What a banger this show was.  Enjoy
Converge
Cervantes
Denver CO (USA)
2006-09-19
Recorded and Presented: SxPxDxCx
Source: MBHO KA-200N > JK Labs DVC-V12 > JB3
Transfer: JB3 > USB > Cooledit > CDWave > FLAC
Time:(39:43.14)
01 Concubine
02 Fault and Fracture
03 Last Light
04 Black Cloud
05 Drop Out
06 Hope Street
07 You Fail Me
08 - no more pit beef -
09 Versus
10 Heartache
11 Hellbound
12 Homewrecker
13 Eagles Become Vultures
14 The Broken Vow
LINK TO MP3 DOWNLOAD
LINK TO FLAC DOWNLOAD
Posted by SxPxDxCx at 2:22 PM No comments:

Email ThisBlogThis!Share to TwitterShare to FacebookShare to Pinterest
Labels: Converge 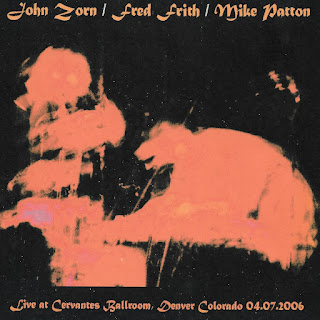 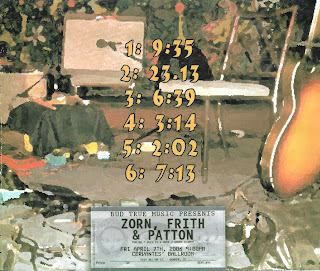 My buddy Lance called this show "the worst thing he has ever heard" which I find hard to believe since he is a Phish fan.  Haha!!  Just kidding buddy love you lots.
This was an evening of Zorn, Patton, and Frith doing an all improvisation set for about an hour.  Zorn on sax, Frith on guitar, and Patton doing vocals(?) and sound manipulations.
It swerves into noise set territory with atonal saxophone squalling, with Patton pattoning, and whatever Frith was doing.  It's not obvious what his contribution to this is upon listening back to it.  It was so long ago I can't recall.  You can kind of see in the above picture lots of guitar pedals on stage so more sound manipulation.
There are moments of control in the chaos and if your into this kind of think it is pretty enjoyable.  I like noise sets generally but if you saw the name Patton and start and end at Faith No More this might not be for you.
Nice MBHO capture and fairly minimal crowd noise.  Enjoy
John Zorn / Mike Patton / Fred Frith
Cervantes Ballroom
Denver CO (USA)
2006-04-07
Recorded and Presented: SxPxDxCx
Source: MBHO KA-200N > JK Labs DVC-V12 > JB3
Transfer: JB3 > USB > Cooledit > CDWave > FLAC
Time: (51:57.61)
01 Improv 1
02 Improv 2
03 Improv 3
04 Improv 4
05 - encore -
06 Improv 5
LINK TO MP3 DOWNLOAD
LINK TO FLAC DOWNLOAD
Posted by SxPxDxCx at 8:22 AM No comments: 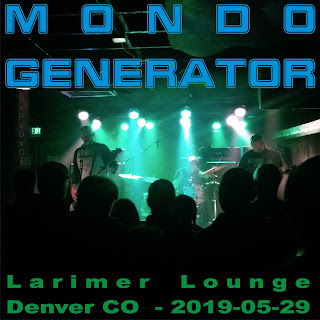 I was lucky enough to see Kyuss live back in 1995.  The opened up for Faith No More with Babes In Toyland on the bill too.  Nick Oliveri was long gone from the band by then.  Scott Reeder played bass.  It was amazing and cemented my love for that heavy vein of hard rock that was surfacing in the 90s.  Stoner Rock, Desert Rock, whatever you want to call it.  That scene spawned so many amazing bands.  Hell the splinters of Kyuss alone have produced a pretty incredible array of bands from it's members.
So I've been keen to follow what Nick has been up to and been a Mondo Generator fan from the first note I ever heard.  A not to be missed live act for sure.  This night Mondo was opening for the mighty Church Of Misery and came loaded for bear.  This live lineup features Mike Pygmie on guitar and Mike Amster on drums and they were tight as hell and absolutely crushed.
Mondo Generator has 2 new albums out this year on Heavy Psych Sounds.  Go buy that shit.  Nick is a road dog and no doubt has taken a hit from not being able to tour this year.  Go support him and all independent artists and labels in anyway you can in this crazy time.
I think this recording turned out really nice and the set list is chalk full of bad ass songs.  I had never heard 'Shawnette' from Cocaine Rodeo live before.  Killer originals and some Kyuss and QOTSA covers.  Hot damn!!   Enjoy.
Mondo Generator
Larimer Lounge
Denver CO (USA)
2019-05-29
Recorded and Presented: SxPxDxCx
Source: AT933 >SP-SPSB-1 > M10
Transfer: M10 > USB > Cooledit > CDWave > FLAC
Run time: (42:09.10)
01 Molten Universe (Kyuss)
02 13th Floor
03 F.Y. I'm Free
04 Up Against the Void
05 Green Machine (Kyuss)
06 Six Shooter (QOTSA)
07 Shawnette
08 It's You I Don't Believe
09 The Last Train
10 Invisible Like the Sky
11 Listening to the Daze
12 Allen's Wrench (Kyuss)
13 Kyuss Dies!
14 Millionaire (QOTSA)
LINK TO MP3 DOWNLOAD
LINK TO FLAC DOWNLOAD
Posted by SxPxDxCx at 7:49 AM No comments: 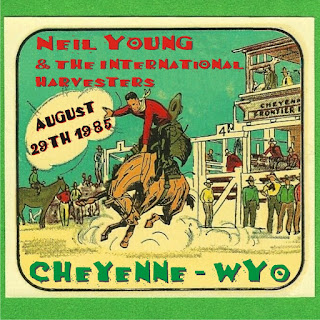 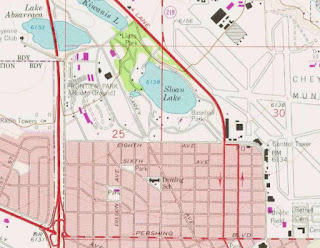 Here is a show from the way back machine that happened in my home town in 1985.  I was 16 years old and way more into Ratt, Motley Crue, Iron Maiden, and Metallica to care about going to see an old fossil like Neil Young.   I regret that a little bit as I knew who he was.  I had been a fan of his weird Trans album and the Shocking Pink's stuff.  I remember seeing him on Night Flight in that weird movie with Devo Human Highway. Certainly I had heard all of his hits by that point.
So when he came to town to play a benefit for flood victims at the end of the summer of 85 I was just too cool for school and me and my BMX buddies laughed about it and didn't go.  We we're busy making plans to go see Ratt in Denver the next month.
When I found a copy of this recording a few years ago it peaked my interest to see what I had missed.  I don't think 16 year old me would have been particularly impress if I had gone to the show but 50 year old me thinks this is quite the show.
He was one tour for his album Old Ways at the time.  Which leaned into the outlaw county a bit with guest spots from Waylon Jennings, Marty Stuart, & Willie Nelson.
Who made this recording is lost information to me.  I checked out some usual taper sources and Neil Young sites and no credit is given.  This was the height of the Grateful Dead touring around a allowing people to record them so I know people were upping their equipment game for recording live shows.
I don't think Neil has been ever as taper friend as the Dead but to my ears this is a fix position audience microphone recording.  It is close enough to the crowd to hear them between songs but high enough up and close enough to the PA to sound really good during the performances.  Someone had to have been flying some mics on a stand either in the crowd or at the FOH.  Who ever you are taper I just want to say good job.  Thanks for capturing this so I could relive some teenage life choices.
The fade out at the end of Helpless and the seemingly cut off banter during the "interlude" track make me think that was the tape flip moment.  The 1-2-3 of Down By The River / Old Man / Powderfinger is especially fantastic.  Enjoy.
Neil Young & The International Harvesters
Frontier Park
Cheyenne WY (USA)
1985-08-29
Recorded: unknown
Presented: SxPxDxCx
Source: ? > CDR > EAC > FLAC
Time: (90:50.00)
01 Country Home
02 Comes A Time
03 Looking For A Love
04 Heart Of Gold
05 This Old House
06 Southern Pacific
07 Somewhere Over The Rainbow (Terry McMillan Harmonica Solo)
08 Sugar Mountain
09 Helpless
10 - interlude -
11 Nothing Is Perfect
12 California Sunset
13 It Might Have Been
14 Field Of Opportunity
15 Down By The River
16 Old Man
17 Powderfinger
18 Grey Riders
LINK TO MP3 DOWNLOAD
LINK TO FLAC DOWNLOAD
Posted by SxPxDxCx at 8:30 AM No comments: