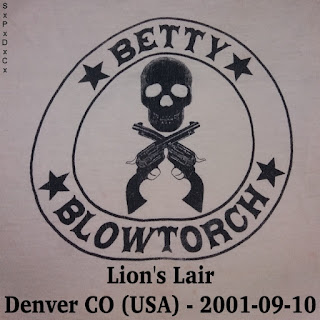 Growing up in the hair band era and being a fan of a lot of those bands in the 80s Betty Blowtorch was right up my alley.  They were jokey but still had a respect for the rock n roll that was made in the 80s.  Unlike say Steel Panther who lean way into the joke side.

Sadly only a few months after this show lead singer and bass player Bianca Halstead was killed in a car crash in New Orleans.  Cutting short what ever momentum they had.

Lion's Lair shows are always fun.  This one included.  Audio is a little rough at first but gets better.

LINK TO FLAC DOWNLOAD
Posted by SxPxDxCx at 7:57 AM No comments: 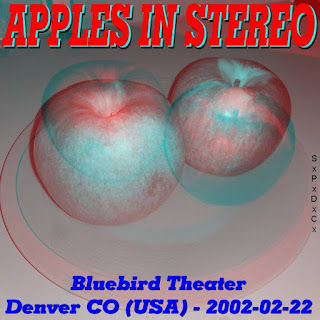 Here is a Apples In Stereo set at the Bluebird Theater in Denver back in 2002.  This was not long before they put out their album Velocity Of Sound.  They play a few songs from than on this night.

On this night they opened up for The Breeders set that I posted back in 2014.  Enjoy.

LINK TO FLAC DOWNLOAD
Posted by SxPxDxCx at 5:28 PM 2 comments:

Email ThisBlogThis!Share to TwitterShare to FacebookShare to Pinterest
Labels: Apples In Stereo 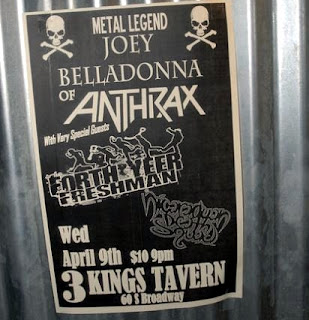 This was a crazy night and show.  Lots of metal people in Denver stoked to see Joey Belladonna live at a small club.   Then the power goes out on almost the entire block.  Show looks in doubt.

We notice that the bar across the street still has power somehow so we go hang out there for a bit trying to decide what to do.  After quite a while the power comes back on and the show is a go.

Right before Belladonna's set someone gets assaulted out in front of the venue.  They are hurt pretty badly and a ton of cops, firetrucks, and ambulances show up right out front.

Do to the power outage and the show being on a weekday night it was pretty sparsely attended but everyone that was there either knew each other personally or recognized each other.

About midway though Joey's set these muscle heads dressed in polo shirts and khakis roll in and decide that they are going to mosh.  To them that meant knocking people to the ground and acting like tough guys.  Totally stupid and not in the metal spirit of how moshing works.

A friend of mine tried to tell one of the dudes that kind of shit wasn't cool and got pushed to the ground.  That's when about 10 of the metal crowd pilled on that goon.  Right in the middle of Caught In A Mosh ironically.

The ridiculous fracas resulted in these dudes being dragged out of the club.  One of them wouldn't stop choking another friend of mine (RIP Haney) until they got by the door and saw at the police outside.  Then the shitheads started saying "we're cops we're cops".

Turns out they were jail guards or private security or some bullshit.  The cops pulled them to the side and told them to hit the road.  One of them dropped his phone in the mayhem and had the balls to come back and try and get it.  3 Kings owner told him to get the fuck out of his bar and don't come back.

Joey never stopped playing and at the end of the song while all this shit is going down.
He says "Oh man your fucking crazy man!!"

In a google search for a flyer or picture from this show I found this flickr post with a bunch or photos a Stephanie Cabral took.  Pretty cool.
Flickr page with Belladonna photos.

Figured this one needed to see the light of day.  Had to believe that was 12 yeas ago.  Enjoy.

* Joey's mic goes out for most of this song

LINK TO FLAC DOWNLOAD
Posted by SxPxDxCx at 8:28 AM No comments: 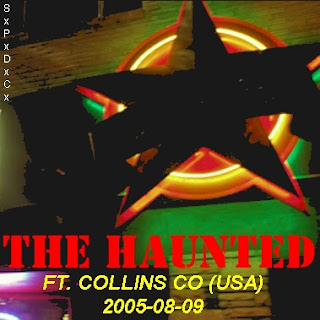 Had some free time with current world events so I've been pulling some older stuff that I think deserves to see the light of day.

Here is a Haunted show at the beloved Starlight in Fort Collins Colorado.  Fun little spot with great pinball and a good sounding cozy room for shows.  Saw some kick ass stuff there back in the day.
Today it lives on as Hodi's Halfnote.

I recall I kind of got dragged to this show.  Ft Collins isn't far from Denver but far enough.  A friend talked me into going and he was driving.

I also remember the Black Dahlia Murder guys giving the crowd shit for being at this show when Iron Maiden and Mastodon were playing in Denver the same night.

Anyway here is a short but ripping set from Swedish band The Haunted.  Good times.

LINK TO FLAC DOWNLOAD
Posted by SxPxDxCx at 6:01 PM No comments:

Email ThisBlogThis!Share to TwitterShare to FacebookShare to Pinterest
Labels: The Haunted 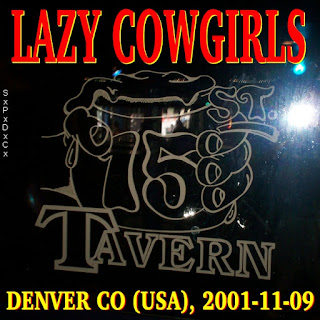 I'm working on compiling a chronological "best of" but in the meantime I figured I share one of my favorites of the batch.  Los Angeles punk luminaries Lazy Cowgirls!!  What a fun night this was.  Also on the bill was Denver's Down N Outs and the Toilet Boys from NYC.  Super solid rock n roll lineup.

One of many killer shows that I saw at the Tavern.  Watch in the near future for the best of.
Until then enjoy this tasty treat.

LINK TO FLAC DOWNLOAD
Posted by SxPxDxCx at 5:18 PM No comments:

Credit to Sam Turner for the wolfagram logo

Well back when this show happened it looked like a new beginning for Speedwolf.  Didn't turn out that way.  Online post last year saying RIP on the band's socials.  Reed is in NYC making new music with his band Overdose.  So this might be the last Speedwolf show ever.   Or maybe not.  Stranger things have happened.

The crowd was super hyped up for this show.  Rabid practically.  Fun good time rock n roll show.
A bunch of the hits and some Motörhead tribute.  Hell of a way to go out if this is it.

LINK TO FLAC DOWNLOAD
Posted by SxPxDxCx at 1:33 PM No comments: