A Perfect Circle on tour four their first album back in 2000.  Way sold out if I recall.
My first wife wanted to go to this show so I got tickets.  I was a fan of Tool but not a huge fan.  Especially since they had started playing arenas by now and I just don't care for giant shows like that most of the time.
Hell this venue is on the about the limit of venue size that I care for.

I had heard the APC album too and didn't hate it but it didn't blow my skirt up either.  Night of the show she decided that she didn't want to go.  No way I wanted to eat the cost of the tickets and frankly I wanted to get out of the house.  Ended up selling her ticket out front for the most over face value that I have every gotten.  Dude was hot to trot to get into the show.

Anyway this isn't the best recording I've ever made but is hardly the worst.  I think the biggest problem with it is that it sounds like the Fillmore.  Big and boomy, filled up with a bunch of yahoos.   Still it's very listenable especially during the less bombastic songs.  It is what it is.  The Cure / Ozzy cover is like chocolate and peanut butter.  Just born to go together.  Enjoy.


LINK TO FLAC DOWNLOAD
Posted by SxPxDxCx at 12:32 PM No comments:

Email ThisBlogThis!Share to TwitterShare to FacebookShare to Pinterest
Labels: A Perfect Circle 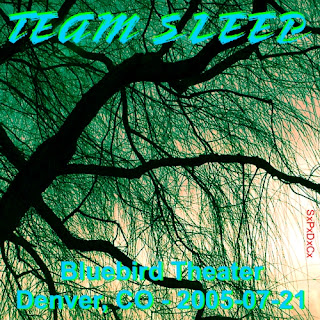 Team Sleep is a side project of Deftones front man Chino Moreno.  For being around for so long their output has been pretty small.  Only one official album has been released and a handful of soundtrack and compilation tracks.  There are some demos that got leaked back the early 2000s as well.

I've been a big Deftones / Chino fan for a long time so I was stoked that Team Sleep was coming Denver back in 2005.  They didn't disappoint.  They played the relativelty small Bluebird Theater.

It was super loud and my only other recollection of this show was towards the end this couple stood in front of me and out made out in full "get a room you two" style.  I guess Team Sleep just stirred their passion.

Overall a nice set from the band including a couple songs like "Scarf Bitch" that haven't appeared on any releases.  Enjoy.


LINK TO FLAC DOWNLOAD
Posted by SxPxDxCx at 3:30 AM No comments: 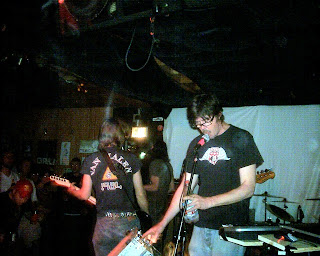 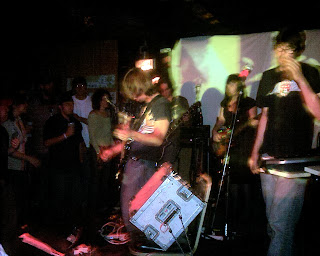 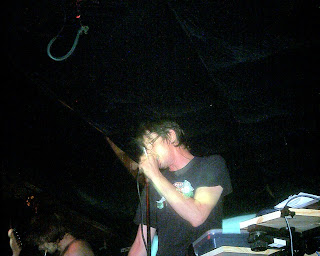 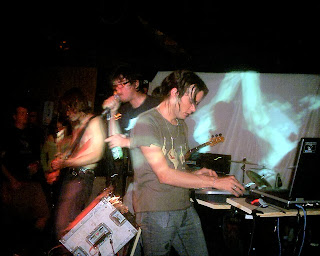 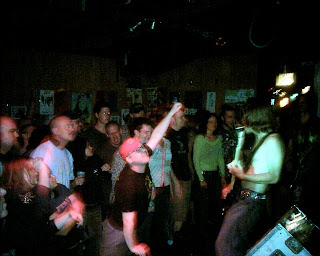 I kind of remember not liking the album Gibby put out with His Problem.  Maybe that is why I filed this away and sat on it for so long.  9 years latter while listening to it to figure out the set list I was thinking it sounded pretty good.

Just as weird and psychedelic as the Butthole Surfers.  More on the mellow side of that coin.  If you are hoping that he played a bunch of B.S. stuff you are going to be disappointed.  He only does one B.S. song. but on the plus side he does a very extended version of The Fuckemos song New Mexico.  You might have heard The Lemonheads version on the cover album they put out a few years back.

I couldn't figure out what track 6 is.  Some of the lyrics seem to be from a Captain and Tennille song but not enough for me to call it a cover.  If any of you readers know what it is I would love to hear about it in the comment.  Thanks.


LINK TO FLAC DOWNLOAD
Posted by SxPxDxCx at 5:50 PM 3 comments:

Email ThisBlogThis!Share to TwitterShare to FacebookShare to Pinterest
Labels: Gibby Haynes & His Problem 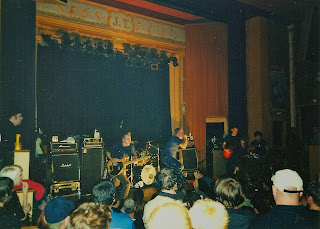 Botch was opening up for the Murder City Devils this night in Denver.  I believe at the time I had heard of Botch but had never seen them.  They blew the roof off the place.

This was an all ages show and at the time they usually put the under 21 people upstairs in the blacony of the Bluebird.  Well Botch didn't like that and the theater made everyone finish their drinks and go upstairs so that the floor could be all ages.  It made sense really because both Botch and the Murder City Devils were drawing a young crowd.

Here is my recording of Botch on that evening.  Enjoy.

01 To Our Friends In The Great White North
02 C. Thomas Howell as the Soul Man
03 Vietmam
04 Transitions From Persona to Object
05 Framce
06 St. Matthew Returns to the Womb
07 Hutton's Great Heat Engine
08 Micaragua


LINK TO FLAC DOWNLOAD
Posted by SxPxDxCx at 12:55 PM No comments:

Email ThisBlogThis!Share to TwitterShare to FacebookShare to Pinterest
Labels: Botch 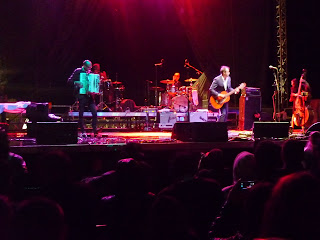 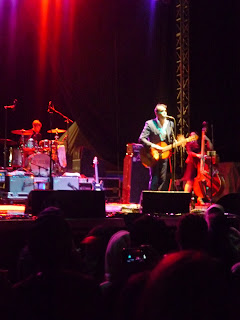 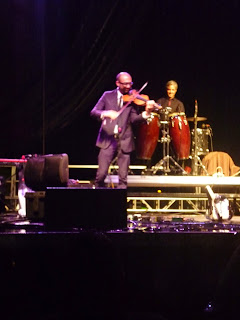 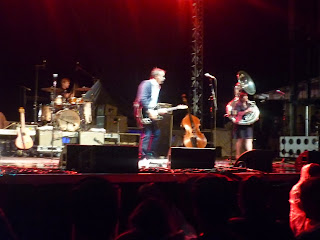 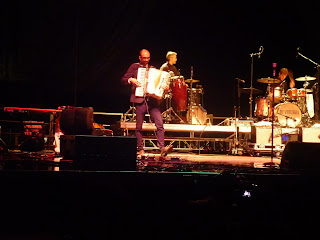 Devotchka played at the same time as Rancid so there wasn't very many people that stuck around in the rain to watch them.  They were kind of the odd man out on the Riot Fest bill anyway.  Still I was excited to see them.  It's been a long time since I had.  I think the last time was way back in 2004 or 5 when I saw them open up for Marilyn Manson.  Speaking of odd billings.

Did I mention the rain?  It was a constant downpour during their set.  In the quite parts you can hear the rain hitting the hood of my jacket.  The band played on undaunted by the weather.


LINK TO FLAC DOWNLOAD
Posted by SxPxDxCx at 6:57 PM No comments:

Email ThisBlogThis!Share to TwitterShare to FacebookShare to Pinterest
Labels: Devotchka 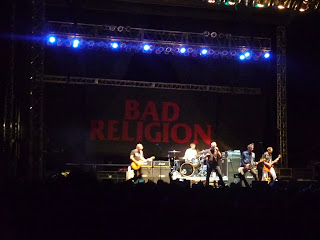 Bad Religion was the first band to play once they re-opened the festival site after the inclement weather.  The ground was a sloppy mess but at least it had stopped raining.  For the moment anyway.  The rain did return.

Greg Graffin comments on how good the food smells being grilled and hopes that he gets to have a sausage before the end of the set.  Sure enough right before No Direction someone shows up with some grilled meat on a bun for him.  I've seen a lot of shows but that is the first time I've ever seen concessions delivered to the stage.

Nice mix of old and new songs.  The sound is a little rough at first but gets better as it goes along and as I got closer.  Enjoy.


LINK TO FLAC DOWNLOAD
Posted by SxPxDxCx at 4:16 PM No comments: 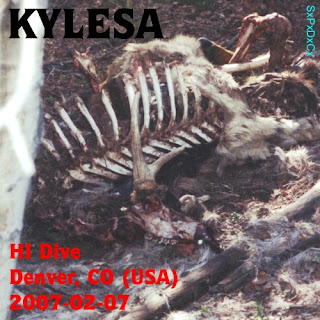 Kylesa was still touring behind it's 2006 release of Time Will Fuse Its Worth at this show.  So the setlist is heavy with tracks from that release.  With a couple older songs and a Pink Floyd cover thrown in.

They opened up for Wino's band The Hidden Hand.  This was my first time seeing both of the bands and became an instant fan.  I think this turned out really nice and I hope you enjoy it.


LINK TO FLAC DOWNLOAD
Posted by SxPxDxCx at 3:12 PM No comments:

Email ThisBlogThis!Share to TwitterShare to FacebookShare to Pinterest
Labels: Kylesa 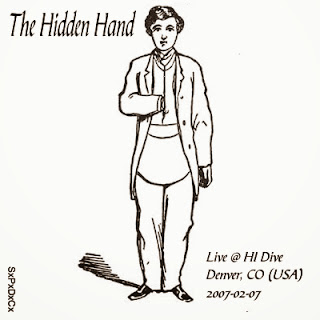 Scott "Wino" Weinrich has, and is, in a lot of bands.  Sadly I think this one, The Hidden Hand, is no more.
If your a fan of any of his other bands and are not familiar with these guys do yourself a favor and check it out.  It's right up that doom / stoner rock vein that he mines so fruitfully.


LINK TO FLAC DOWNLOAD
Posted by SxPxDxCx at 2:38 PM No comments: