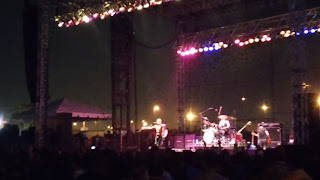 It's always fun to see Iggy Pop.  This night was no exception.  It took me a while to become a fan.  The first stuff I really heard from him was at the end of the 80's when his album Brick By Brick came out.  Candy was the big hit and I remember heard Butt Town a lot for some reason.  It didn't win me over.

In fact I saw him on the Brick by Brick tour but I only went because Alice In Chains was opening up for him right after their first album had come out.

It took some digging into his back catalog for me to become a fan.  Well worth it.  The man is an American Rock N Roll treasure.

Slipped up and didn't get the very beginning of his set and I cut Nightclubbing due to an extended conversation.  Other than that I think it turned out pretty nice.  Enjoy

* Played but not recorded

LINK TO FLAC DOWNLOAD
Posted by SxPxDxCx at 8:42 PM